Breaking Down the Language Barrier 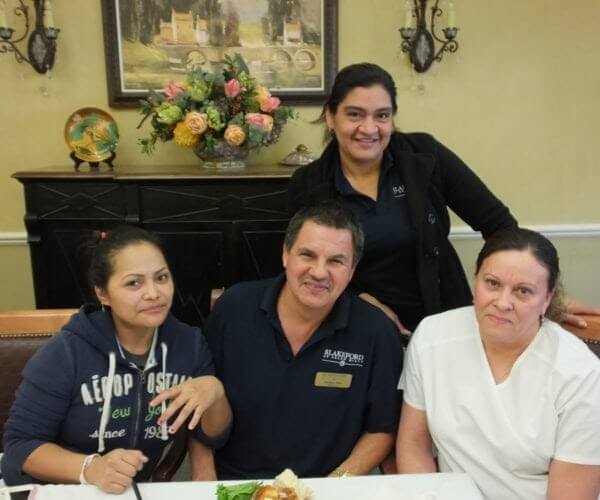 “I can’t imagine how challenging it would be to work in an environment where I did not completely understand the language,” says Blake Harper, Translation Coordinator for Blakeford since September 2014.

Providing translation services to team members is a direct result of Blakeford’s initiative to raise the bar on service hospitality throughout the organization. In 2014, Blakeford began a series of in-depth Cultural Orientation and Customer Service Training classes for all team members, even for those who have been at the community for several years.

“In order to provide our residents with the best service and hospitality, it is critical to Blakeford that all team members have the tools they need to be able to be the best they can be,” notes Chief Administrative Officer Allison Griffith. “This includes our team members who only speak and understand Spanish.”

The idea of providing translation services was a logical step in creating exemplary service across the board. Those services include translating, both in writing and verbally, monthly in-services, customer service, and new hire training as well as on the spot counseling and coaching.

Blake, a law student, was in high school when he first became interested in the Spanish language. “I had the opportunity to travel to an orphanage in Ensenada, Mexico on a mission trip. I was deeply impacted by this experience. However, I became frustrated during my time there because I wasn’t able to communicate well,” he recalls. “In college, I decided to get serious about the language and made it my Minor. As my Spanish improved, and through a series of events, I was given the opportunity to teach a class of 30-40 Hispanic adults in the Nashville area with literally no knowledge of the English language. I did this for two years and it was one of the most rewarding things I have ever been involved in. As I became a more advanced speaker, doors were opened for me to become an Interpreter.”

Beginning in October 2014, the first Cultural Orientation classes were held specifically for Spanish-speaking team members. Blake teamed up with Training Coordinator Rhonda Gannon to present the history, vision, and goals of Blakeford. The feedback has been extremely positive.

Housekeeper Madeline Rodriguez says, “It’s a rewarding thing because now I understand much better. Thank you!” Her colleague Fabiola Garcia agrees. “We are learning more and we know, without a doubt, what is being said.”

“It’s unbelievable! The thankfulness and gratitude has been overwhelming,” states Ms. Griffith. “Team members are much more engaged and feel appreciated.”

Blake is equally thrilled with the feedback and looks forward to continuing his role as Translation Coordinator. “I aspire to aid in fostering an environment where everyone has the same opportunities to fully comprehend. I would like to do this not only through the translation of documents and the on-going education classes, but also through teaching some type of language classes to both English and Spanish speakers,” Blake says. “I hope to provide the community at Blakeford with the tools and skills to communicate with each other. It is my goal to help bridge this gap and create a more efficient workplace.”

For more information on this topic, contact Allison Griffith at allison.griffith@blakeford.com